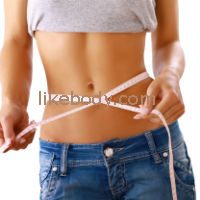 As if you didn’t have enough of a reason to pay attention to your weight and try to take it easy this holiday season, new research has come up with another. A recent study has shown that waist size and longevity are connected.

The study was conducted by the American Cancer Society. That highly reputed organization tracked the health data of over 100,000 people. They then conducted an analysis of the data which took in a nine year span. What they found was that there was a strong connection between waist size and longevity.

More specifically, they determined that people who had a bigger waist size doubled the risk of death from any disease when compared to the risk of dying of people who has smaller waists. This waist size and longevity study was published in The Archives of Internal Medicine.

The researchers who conducted the study underscored the importance of this information specifically for women. They pointed out that there was an even greater link between a woman’s waist size and risk of death than was the case in men. In fact, women at a normal weight but large waist size had one of the greatest mortality risks.

This study provides what could be very important insight at a time in which many doctors are still considering a person’s BMI. That form of health rating based on certain weight to height ratios has been under growing scrutiny over the last few years. This new research has only added to the doubt being placed on the value of using the BMI system of measuring a person’s mass in order to determine their overall health and risk levels.

It is becoming clearer that the size of a person’s waist plays a notably greater role than has previously been considered. This is a health indicator that may be worth increased attention instead of relying exclusively on a person’s weight when compared to his or her height, sex and age.

Many people find it challenging to shrink their waist size, but exercise in combination with healthful dieting and one of the best diet pills, such as APEX-TX5 can make a considerable difference.